People that have robot bodies. No part of them are organic anymore. The bodies were built before the collapse and some people (willing or not):
These are just examples, as always, you are encouraged to come up with your own, even if it's not right away.

Don't need to (and can't) eat, drink, or breathe.
Can't benefit from potions or other items that rely on having a metabolism/digestive tract.
Immune to Poison, disease, any effect that requires a metabolism or organs (petrification, death effects, magical paralysis, etc. still affect. Mutation doesn't. Unless the DM wants it too. That would be weird.)
Don't heal naturally: Must spend 10en (gp) per HP to repair, and spend 1d3 hours per HP in a safe and well-lit setting to repair themselves if they have the skills. Else they require a mechanic (treat as a healer for the requisite time for price; minimum 15gp per HP.)
Do have souls/spirits, so are affected by raise dead, healing spells, and such.
Affected by things that affect metal.
Armor is affixed plating: Can only be swapped out when in a safe place. Instead of unarmored - leather - chain - shield it's light - medium - heavy - superheavy. All are metal with the same effects, but all except light cost double after character creation (You start with light.)


You may roll on the following table, and may spend 75% of your starting cash to get a single reroll. If you don't, you're an average humanoid mechaborg with no special features.

20-22 Karakuri: -1 initiative (call on the character last and count their action after everyone else on their side if using group initiative,) Primarily wood instead of metal, -10% repair costs in areas where wood is plentiful, May choose to "lock" to stand perfectly still for an indefinite amount of time.

23-24 Heavyarms: 2 attached shoulder guns (small) may attack with one or both, but no other attacks at the same time. Firing both provides +1 to hit or +1 damage, chosen before the roll. Consumes ammo normally. Not initially proficient. May replace them with larger ones at double the cost. Can't use superheavy plating.

25-26 Mighty: one arm (1d2: primary hand, offhand) is a pile bunker. Can use as an attack for 1d10 damage, but can't use the round immediately after. Arm has no hand. Pile bunker may provide a bonus to open doors at DM discretion.

36-40 Steam-powered: 1d5 heat damage to those touching your torso or per round of grappling. Need 1d3 gallons of water a day or -1 to all rolls and move half as slowly the first day, -2 to all rolls and move 1/4 as slow the second, and go inert the third day. Can consume potions/elixirs for half effect.

41 Heaven: Go berserk when below quarter HP or when you fail a save vs a fear and/or madness effect. During such: Unbreakable morale. Fight for 3d3 rounds, attacking as if they had 18 str and going after enemies first and closest targets after. Continue fighting for the indicated amount of rounds, even if brought to 0 or below (if at 0 or below at the end you die.) Collapse and remain inert for 1d10 turns after, if not dead.

42-48 Robo: Can combine with 1 other Robo-type mechaborg at a time, which takes 1 round.
Example: a mechaborg fighter and a mechaborg magic-user combine. The Fighter's 14HP are halved to 7 and added to the MU's 5, for a total of 12. They use the fighter's Str score and the magic-user's Int score, and average the rest. They roll off, the fighter gets to start. They can't use the MU's spells, but they can attack at their own to-hit roll this round.

49-50 Veheic: Nonhumanoid. Can affix one crossbow or gun at a time to body at triple cost. Triple Land move speed. Can carry double the normal capacity, and can carry 1d3 passengers (can't be changed). Count as Large size. Up to you whether you're a tachikoma, tank, robo-buggy, herbie or something else.
Posted by Neko--kun at 8/03/2013 08:52:00 AM No comments:

"All thanks to the GREATEST LORD WAKAMAN! May all the Praise be give to him. I am Trasiin! I hold GREASTEST LORD WAKAMAN in sincere gratitude and high esteem for this help and his kindness he has rendered to me. Without compromising word, GREATEST LORD WAKAMAN helped me in getting back my long lost relationship and also bring back my life when I thought all was gone. I am a new creature now with the help of his powerful spell! And he also rendered help to 2 of my very good friends I also introduced to him, one got back his huge amount of money! The other is now a happy mother with 2 kiddies now and many more I have seen in different forms. Friends! I Plead with you, search no further for charlatans who act as real spell casters, the realest and most true spell caster is GREATEST LORD WAKAMAN! He is so true in his words, and they are substantial!" - Misshapen Mutant

Greatest Lord Wakaman is a foul flesh-warper who wanders Grottheim, bestowing "gifts" upon people at his whim. He wears a long mask covered in geometric patterns, with two great horns rumored to be hewn form a cambion's skull. He is draped in tattered, shaggy robes of a multitude of colors. Normally he is followed by 1d4+1(exploding die) devotees, each having been granted a random one of his "gifts." His devotees will generally attempt to restrain attackers and those who are percieved as having wants, needs, or problems (most adventurers) while Wakaman bestows one of his gifts. Wakaman will take offers of magical knowledge, and if the knowledge is great (5th level spell or highter or equivalent) he will grant in exchange the knowledge to perform his Warp Flesh ability 1 time per week. The second trade will allow the use once per day, the third once per hour, and the last will grant unlimited uses. However, each time the recipient of the ability has 1 random part of their face melted shut (1d4: Eyes, Nostrils, Mouth, Ears.) And will give them a similar, unhorned mask like his own. As long as they wear the mask, the melted part does not impede them: They may speak, hear, see, and smell  normall, and they no longer need foor or water if the mouth is melted shut. Under the mask, Wakaman's eyes, lips, nose, and ears are all melted shut.

Warp Flesh - On a touch, Wakaman deals damage as he attempts to mutate the recipient. On a successful hit, the target makes a poison/death/fortitude save. If it fails, they gain a random mutation (I suggest using the metamorphica) and must Save vs Spells/Will or else their attitude towards Wakaman will be as if he is their Greatest Lord. They are free to persue other tasks, but will preach the saving power of Greatest Lord Wakaman to all, even those that don't listen, and will generally seek to lead people to him. They will always be able to find their way back to Greatest Lord Wakaman. (If a character gains this ability, replace "Wakaman" with the name of the character.)

Devotees that accompany him are either normal men with 1d4 mutations each, or rolled NPCs with a like number of mutations, DM Discresion.

The second set. Light Foot (no shield and shortswords.) 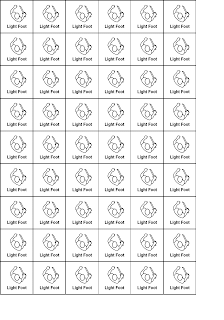 I'm making a project to make these kinds of counters like the old battlesystem box had. I first saw them on eBay, not knowing where they were from, and after a bit of research discovered their origins.

These ones here are a basic clone of one of the human counters, renamed to the OD&D/Chainmail troop type. I've made a few with other weapons than swords, but they aren't in counter sheet form yet. This sheet is B/W only for ease on printers. Just print (centered), glue to cardstock, and cut along the lines. 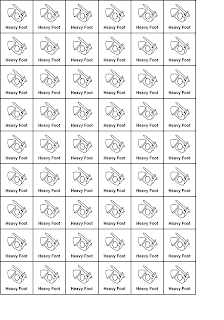 Instructions: Roll two d6's on a sheet of paper. Draw a corridor between them, read the numbers on the dice for special rules. Corridors that overlap form an intersection ( or overlap in the Z axis, if you can handle that. ) Corridors are 1d3 x 10ft wide and 1d3 x 10ft tall, rooms are 2d3 x 10ft tall. Or you can just assign them heights/widths.

when dice roll the same number, creates a room instead of an intersection

if either is 1-2, the corridor/room has a special feature, determined by the other die

Special feature
1 monster
2 monster and trap
3 monster and treasure
4 trap ( 3/6 chance of it being on door(s) )
5 treasure and trap
6 other. roll on Extra Special Features

Super Special Features
1 portal to another plane ( Hell, Vietnam during the war, Carcosa, DM choice really )
2 elevator / teleporter ( down/up several dungeon levels, or even to some remote location on the surface )
3 exotic rival adventuring party ( martians, 1920s investigators, lizardmen, go nuts )
4 avatar of: a god / demon lord / other super-powerful being ( come up with a reason they're there )
5 wrecked piece of advanced machinery ( space ship mostly embedded in the rock, rusted upside down tank, half a flying saucer )
6 roll again. if that's also a 6 then there's an artefact in this room. if you can't handle that then make it a talking magic sword or space marine armor or something
Posted by Neko--kun at 7/18/2013 09:52:00 AM No comments:

1. Warlock - 1d3 damage, 60′ range magic blast at will (allows save vs spells to resist)
2. Sensitive - Detect magic by touch
3. Planar Scholar - +1 on reaction rolls with extraplanar entities, 15% chance to be able ot communicate with newly met entities.
4. Scribe - Can copy a scroll for 1/2 the normal cost & time to make one.
5. Alchemist - Can make a copy of a Tussin for 1/2 the normal cost & time to make one.
6. Seer - Cast Augury 1/day per 3 levels
7. Witch-Hunter - +2 on saves versus spells
8. Two-Fisted Sorcerer - Can cast two spells in one round 1/day, -2 spells per day of 4th-9th level spells
9. Judazian Cultist - At each spell level replace one magic user spell with a spell from the same level cleric spell list.
10. Guardmage - Can wear leather armour
11. Focused - +10% to earned XP
12. Choose one or make up a new one

1. Black Arcanist – +1 spell prepared per level. The amount able to be cast per day remains the same, but the caster can choose from any prepared spell of that level to cast using the slot. Prepared spells are not lost as they are cast, but the slot is "used up" until spells can be prepared again. A tiefling of this subclass cannot wear armor or use any weapons besides Daggers.
2. Dirgesong Sniper – +2 to hit with bows
3. Woodland Ghost – 66% chance to be unseen and unheard in the wilderness
4. Arcane Mercenary – +1 to hit and damage with swords
5. ManHunter – +1 to hit and damage against humans
6. Tarterian Whisperer – Cannot wear armour, cast Augury 1/day per 3 levels, Command 1/day per level
7. Dark Rider – +1 to hit, damage and AC while mounted
8. Eldritch Swordsman – 1/day/level can cast a spell on a sword while attacking, spell effect centres on the sword if it hit the target, or is lost if the attack misses.
9. Spellblade - As long as at least 1 spell of highest level available is prepared: +1 to hit with melee weapons, +2 damage with melee weapons and +1 AC. -1 spell per level.
10. Otherworldly Charmer – +1 reaction roll bonus
11. Focused – +10% to earned XP
12. Choose one or make up a new one 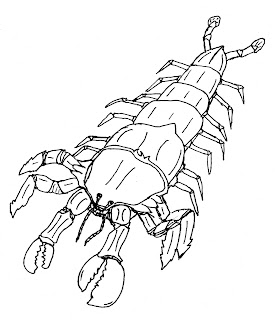 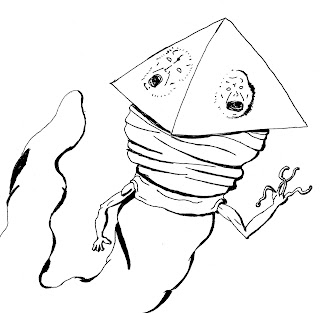